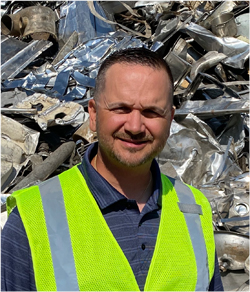 COMMUNICATION WILL BE MY PRIORITY AS CARI CHAIR

CARI’s 2020-21 Board of Directors was elected during our Annual General Meeting held on June 10. Since we were unfortunately denied the chance to introduce the incoming board at our annual convention, this edition of PULSE includes a full account of the board appointments and other proceedings at the AGM.

I have met many CARI members over the years, but not all of you know me (yet), so I want to take this opportunity to introduce myself. I have been a Senior Trader at Cronimet Corporation located near Pittsburgh, Pennsylvania since 2005, and served as CARI’s U.S. representative since 2014. While on CARI’s board, I served as Secretary/Treasurer from 2016 to 2018 and Vice-chair for the past two years. In addition to my work with CARI, I have served on the ISRI Pittsburgh chapter board for six years. After contributing to the CARI board in various roles since June of 2014, I’m now honored to embrace the duties of Chair.

In the wake of the COVID-19 crisis and post-pandemic economy, our industry will face new challenges in the coming years. The many updates and bulletins that CARI shared during the early days of the COVID-19 crisis were a valuable resource for many of our members and an excellent example of what effective communication can offer. As Chair, my priority will be to improve the communication flowing in both directions between CARI and the CARI membership. I would like to see expanded use of social media and other platforms to give the membership a timely and complete account of all that CARI does on its behalf.

Just as important, I will encourage CARI members to feel that the Association and Board are here for them in any situation. Members should feel comfortable reaching out to CARI no matter how minor the issue — because in fact there are no minor issues.

I am truly looking forward to my term as Chair of the CARI Board. I’d like to thank the outgoing Board members, Dan Klufas and Aaron Rosenthal, for their many efforts over the past few years, and my predecessor, Matt Zubick, for his hard work and expert guidance of the Association during his time as Chair. I hope to do you all proud as I step into this important role.

CARI’S 2020-21 BOARD OF DIRECTORS AND EXECUTIVE
The board was declared at the Annual General Meeting held June 10.

The board appointed the Past-chair and elected the following directors to the Executive Committee:

Outgoing Chair Report
In his final address as Chair, Matthew Zubick noted how much change had occurred in the past two years and particularly during the COVID-19 pandemic. He pointed to the development of regional information pages and COVID-19 provincial pages on the CARI website as progress toward making CARI a “one-stop resource that would help members navigate the various rules and regulations for our industry.”

On his goals to boost CARI’s profile and raise awareness of the industry, Zubick noted how over the course of his term “we have increased our press coverage, expanded our social media presence, and worked to educate federal and provincial government representatives about who we are and what we do.”

In closing, Zubick acknowledged how “It is hard to predict what the next few months will bring to our industry, let alone the next two years,” but added “I believe the Association will be in good hands with our new Chair, Kevin Santoro.”

President’s Report
CARI President Tracy Shaw began by stressing the central role of advocacy amongst CARI’s many activities and summarized a number of achievements on that front from the past two years.

At the provincial level, the majority of CARI’s lobbying efforts were focused on stewardship and circular economy programs, which are expanding in all provinces, said Shaw. After highlighting particular inroads made in Ontario, Quebec, Manitoba, and B.C., Shaw asserted that in all instances “these programs must recognize recyclers as the problem-solvers, not the problem.”

At the national level, Shaw continued, CARI’s many advocacy efforts included feedback provided on proposed regulations for processing mercury-containing lamps; on proposed amendments to the Prohibition of Certain Toxic Substances Regulations; and on the Canada-wide Action Plan on Zero Plastic Waste.

“We also continued international advocacy efforts on issues including amendments to the Basel Convention and China’s expanding list of banned and restricted scrap imports,” added Shaw. “Proposed changes to the Annexes of the Basel Convention have the potential to redefine recycling activities at the global level, so it is essential that CARI remains active on this issue.”

Shaw concluded with a summary of CARI’s efforts during the COVID-19 global shutdown, saying “First, we reached out to federal, provincial, and municipal leaders to ensure that our members were declared essential—and we succeeded.” Going forward, “CARI is working with Natural Resources Canada to ask the Federal Government to support the recycling industry coming out of this crisis, to promote a more efficient recycling industry in Canada, and to advance recycling as a feature of product design,” said Shaw.